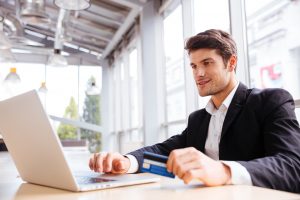 Bitcoin is everywhere – or at least talk of Bitcoin is everywhere. Bitcoins themselves are scarce commodities, not only on account of their market cap – only 21 million will ever be issued – but because at around $2,500 apiece, a whole Bitcoin is beyond the reach of most consumers. Thankfully it doesn’t require an entire Bitcoin to join the cryptocurrency party; the coins can be traded in fractions on platforms like Bitcoin up, allowing for one Bitcoin to be split one million different ways.

Bitcoin prices, together with Google Trends searches, have reached record highs this year, while proponents of the technology have eagerly looked on. From facilitating WannaCry ransomware payments to compelling Goldman Sachs to acquire blockchain technology, Bitcoin has spawned a multitude of applications, some positive, some negative, but all groundbreaking in their own way.

For businesses mulling the merits of using Bitcoin, there’s a lot to ponder. The currency’s volatile price (it’s up 250% since the start of the year) isn’t even the biggest sticking point, as price fluctuations can largely be mitigated by converting from fiat into BTC and back again. Small business adoption of Bitcoin hinges less on the price of the currency and more on the logistics required to make it work. There are three ways in which SMEs might choose to get involved in Bitcoin: as a low-cost B2B payment mechanism; as a means of processing customer payments; and to harness the underlying blockchain technology.

Money transfers have long been a bugbear for consumers and businesses alike. Sending money overseas, such as when paying suppliers or wholesalers, can be costly and slow. Bitcoin surmounts many of these obstacles, allowing money to be transferred in around 30 minutes and negating the need to perform multiple currency calculations. All you need to know is the equivalent, in Bitcoin, of the amount you wish to send or receive in your native currency. Once the Bitcoin arrives in the recipient’s wallet, they can then withdraw it into their own fiat currency if desired. The cost of a Bitcoin transaction peaked at over $5 earlier this year but has since lowered. Even at $5, this is still substantially less than the cost of a traditional money transfer.

For businesses operating in emerging markets, or when importing goods from the Far East or South America, Bitcoin is an attractive money transfer option. It’s not without its drawbacks however, as given that the recipient will likely desire fiat currency, there’s an extra step required. Increasing adoption may eventually make it desirable for businesses to retain a portion of their assets in cryptocurrencies. At present however, this isn’t feasible for most SMEs other than those that work directly with blockchain technology.

Although Bitcoin is often spoken of as being a store of wealth, it’s not simply ‘digital gold’ as it’s sometimes referred to; Bitcoin has practical applications and can be used to facilitate everyday transactions. Japan has taken to the digital currency with gusto, with electronics retailer Bic Camera recently partnering with bitFlyer to accept Bitcoin in-store. Recruit Lifestyle and Coincheck have also partnered in Japan to provide point of sale Bitcoin implementation. For the best example of Bitcoin in action as a customer payment mechanism, look to the gambling industry.

Many online casinos have been accepting Bitcoin and its sister cryptocurrencies such as Dash and Litecoin for years, helping fuel a boom in online gambling(Casinopedia definition here). Customers value the relative anonymity of Bitcoin coupled with its privacy; paying with Bitcoin on the web doesn’t call for giving away the same amount of personal information as a credit card transaction mandates. SMEs interested in accepting Bitcoin can partner with companies such as Coinbase who have vast experience of Bitcoin and are able to safeguard the merchant from the volatility associated with digital currency.

While Bitcoin undoubtedly has huge potential within the business sector, it’s the underlying blockchain technology that is so disruptive and revolutionary. Using the sort of blockchains that power Bitcoin and Ethereum, SMEs can create decentralised platforms and initiate smart contracts which have been described by Chris DeRose as “self-automated computer programs that can carry out the terms of any contract. It is a financial security held in escrow by a network that is routed to recipients based on future events, and computer code.” From renting shared workspaces to unlocking leased bicycles, smart contracts allow businesses to cut out the middleman and become part of a trustless economy. In this brave new world, the blockchain is bond and the immutable cryptographic technology underpinning it is all that’s required to administer enforceable agreements.

While blockchains and smart contracts are the most revolutionary aspects of Bitcoin, most small businesses will want to wait before testing the waters. With a number of innovative technologies currently being trialled by companies such as Slock and micro-loan specialists Synaps, it shouldn’t be long before we learn whether blockchain technology can live up to the hype, benefiting businesses and consumers alike.

6 Employee Training Methods You Must Know About

Why music festivals are big business

Key Ways to Handle Poor Workplace Performance in Your Firm